Here you will find Palm seeds from across the globe and we may occasionally have seedlings.

The Arecaceae are a botanical family of perennial lianas, shrubs, and trees commonly known as palm trees. (Owing to historical usage, the family is alternatively called Palmae or Palmaceae) They are flowering plants, the only family in the monocot order Arecales. Roughly 200 genera with around 2600 species are currently known, most of them restricted to tropical, subtropical, and warm temperate climates. Most palms are distinguished by their large, compound, evergreen leaves arranged at the top of an unbranched stem. However, many palms are exceptions, and in fact exhibit an enormous diversity in physical characteristics. As well as being morphologically diverse, palms also inhabit nearly every type of habitat within their range, from rainforests to deserts.

Whether as shrubs, trees, or vines, palms have two methods of growth: solitary or clustered. The common representation is that of a solitary shoot ending in a crown of leaves. This monopodial character may be exhibited by prostrate, trunkless, and trunk-forming members. Some common palms restricted to solitary growth include Washingtonia and Roystonea. Palms may instead grow in sparse though dense clusters. The trunk develops an axillary bud at a leaf node, usually near the base, from which a new shoot emerges. The new shoot, in turn, produces an axillary bud and a clustering habit results.

Palms have large, evergreen leaves that are either palmately ('fan-leaved') or pinnately ('feather-leaved') compound and spirally arranged at the top of the stem. The leaves have a tubular sheath at the base that usually splits open on one side at maturity. The inflorescence is a spadix or spike surrounded by one or more bracts or spathes that become woody at maturity. The flowers are generally small and white, radially symmetric, and can be either uni- or bisexual. The sepals and petals usually number three each, and may be distinct or joined at the base. The stamens generally number six, with filaments that may be separate, attached to each other, or attached to the pistil at the base. The fruit is usually a single-seeded drupe (sometimes berry-like) but some genera (e.g. Salacca) may contain two or more seeds in each fruit. 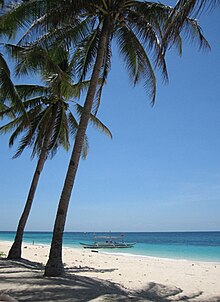 The Arecaceae are notable among monocots for their height and for the size of their seeds, leaves, and inflorescences. Ceroxylon quindiuense, Colombia's national tree, is the tallest monocot in the world, reaching up to 60 meters tall. The coco de mer (Lodoicea maldivica) has the largest seeds of any plant, 40–50 cm in diameter and weighing 15–30 kg each. Raffia palms (Raphia spp.) have the largest leaves of any plant, up to 25 m long and 3 m wide. The Corypha species have the largest inflorescence of any plant, up to 7.5 m tall and containing millions of small flowers. Calamus stems can reach 200 m in length.

This is a stunning palm, with its scarlet crown shaft and petioles, red as sealing wax? Frustratingl..

Phoenix loureiroi is an extremely variable species with a widespread distribution ranging from ..

Originally from northeastern Australia and areas of New Guinea, this small, suckering pal.. This stunning palm is one of the largest and fastest growing in the genus Sabal. It is native t..

This species is perhaps the hardiest of all Trachycarpus, coming from cool and moist oak fores..

So well known as to scarcely need any description, these large, stout fan palms are p..

This is the slimmer of the two species of Washingtonia and considered to be slightly less cold..